The Best Father of the Bride Speech – Ever

When I first met Jamie and Holly at their pre-wedding meeting, I could tell that their day was going to be a relaxed affair.  I wasn’t wrong. It was a good job really, because later in the day was the best father of the bride speech I’ve ever heard!

I arrived at Cheswell Grange in Newport an hour before Jamie and Holly were due to get married. The marquee looked beautiful. 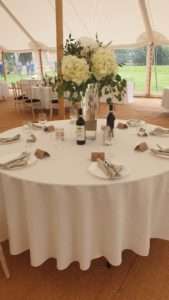 All of the styling Holly had designed and produced herself.  Lawn games were being put in place and Jamie looked very chilled and relaxed indeed.

The Celebrations were delayed slightly, mainly due to the Registrar turning up late thinking that the Ceremony was due to start half an hour later than it was!

Despite the lack of Registrar, Jamie was happy to sit and watch the Olympics, in his relaxed persona.

Slight mishap aside (And an adjustment to the rest of the timings for the day) the Ceremony took place. Canapes and drinks followed, served by Pro-Roasts. And Charlotte Mail captured memories of the day.

Some how or other, despite the delayed start, the day was going so well and relaxed, we managed to go back to the original timings without the day feeling rushed.  Late afternoon, the Guests made their way to their seats in the Marquee, before announcing the arrival of the new Mr and Mrs Cowdrell.

The Wedding Breakfast took the form of a BBQ Buffet served by Pro-Roasts.  As the Wedding Coordinator, I coordinated the service by managing Guests going to the Buffet in table order, beginning with the Top Table of course.  Now the thing with Buffets, there is no easy quick way of service.  It either means everyone going up en masse and having a massive queue, or, as I prefer to do it, table at a time.  Fortunately, all the Guests were happy to sit and chat with their friends and family before it was their turn.

Once everyone had been served the BBQ (and offered seconds), then followed the Speeches.

The Unforgettable Father of the Bride Speech

The speeches kicked off with the Father of the Bride, and oh my, the Groom and The Best Man really couldn’t compete with what was about to happen….

The speech began in the normal way, how he was proud of Holly and told the odd tale about when she was a baby. At which point he pulled out what can only be described as a giant changing mat.  What followed was a re-enactment of a time when Holly was a baby.  I’ve already mentioned the changing mat so I’m sure you can imagine the time, particularly when Holly was invited to lie on the top table. (I will leave the photographs for the Photographer to post them formally!)

Now I have to mention here, that people often say to me “oh your job must be so stressful” and I say no.  I can honestly say watching a Bride get onto a table as instructed by her dad was definitely the most stressful times ever!

Knowing her dad’s sense of humour, Holly took the whole event in her stride. It will certainly be a speech 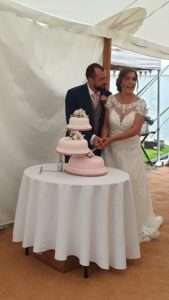 that the Guests will remember!

The Evening Reception began and after Holly and Jamie cut the Wedding Cake – a beautiful creation by the Father of the Bride (I can tell he is a man of many talents!) they went into a fantastic performance for their first dance, Glad you came by The Wanted.  The dancefloor remained full and were entertained by Jamie’s friend who performed various Indie covers as well as Can’t Help Falling in Love with You which was the Bride and Father Dance.

Holly and Jamie’s Wedding was a beautiful and unforgettable Day (For many reasons) and I wish them years of happiness together.