Leap year proposal…. Well it’s come around again – the first time in four years!!  2020 is a leap year, where tradition states that it is the one day where the lady is allowed to propose to her boyfriend. Where has this tradition come from?

The most well-known meaning behind it dates back to an old Irish legend. St. Brigid struck a deal with St. Patrick to allow women to propose to men and not just the other way around.

However, the deal was struck on the understanding that it could only happen every four years!  It is believed to have been introduced to balance the traditional roles of men and women. 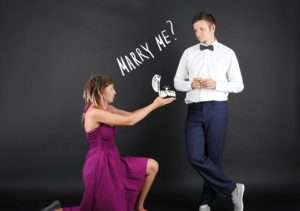 Aside from this, In Scotland, Queen Margaret (Who was unmarried) enacted a Law in 1928 which allowed women to propose to men, however they must wear a red petticoat under her skirt to warn her intended what she planned to do!

In Greece, getting married in a leap year means that the marriage is unlucky and is likely to end in divorce!

In Finland, proposals were supposed to bring good luck and if the boyfriend refused the proposal, he had to pay his girlfriend a fine – usually fabrics for a skirt.

So, there you have it, some weird and funny traditions on a topical note.

ARE YOU GOING TO PROPOSE ON SATURDAY 29TH FEBRUARY?

Don’t forget, here at LMS Weddings, we can help with all of your wedding planning needs.  Drop us a line on our Contact page to get in touch.