European Floral Design through the ages

Have you ever wondered where the style of a particular floral design originates from? The answer is the various European eras. 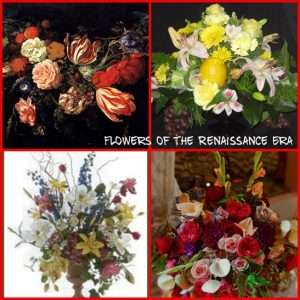 This period continued from the Roman and Greek era.

While floral arrangements were relatively natural-looking and straightforward during the beginning of the renaissance era. Towards the end of the period, they began to get more ornate.

Various fruit and vegetables were used in floral design, mixed with flowers such as lotus, jasmine, iris, tulips, roses, hyacinth, lilac, and foliage such as olive and ivy or laurel. 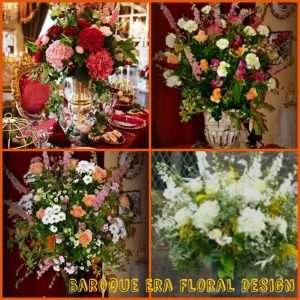 Continuing from the Renaissance period was the Baroque era. This introduced a more ornamental look with big branches and warm coloured leaves mixed with large flowers.

The arrangements were made in huge metal, porcelain, or glass containers and were quite striking.

During the early era, the floral designs were symmetrical. As the period ended, they became more asymmetrical.

Flowers used during the Baroque period would have included iris, marigold, lily, peony, narcissus, hollyhock, and roses. Accessories were also often incorporated into the designs. 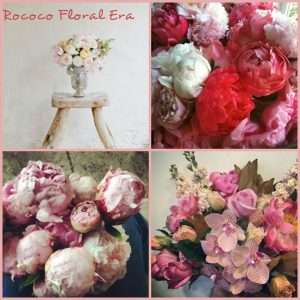 This period saw the introduction of a more feminine style. Prettiness and charm were important in the designs. Arrangements were tighter and denser. The height was more important than the width of the design.

Flowers were usually displayed in a compote, alabaster, urn, or Dresden ware.

Common flowers used during the Rococo era were delicate pinks such as roses and hydrangeas. 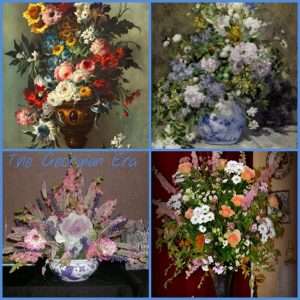 Floral design during this period was very much under French influence. More vibrant flowers were beginning to be used and were displayed in Wedgewood tureens and urns. Most arrangements were made upon the flowers’ fragrance rather than beauty. 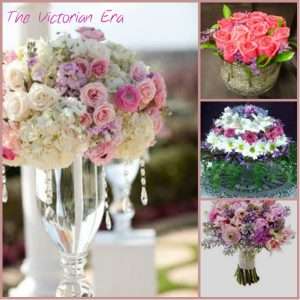 This was not a famous era for floral design. The emphasis was on miniaturisation. The posy was introduced, and arrangements tended to be using small flowers. Forget- me -not’s were common, but flowers found in the typical garden were also beginning to be used, such as lilies, anemones, dahlias, fuchsias, asters, and bleeding hearts.

Small trinkets were used through the arrangements such as feathers, shells, or figurines. These would be placed under glass bell jars and used as centrepieces for dinner parties.

During this time, an attempt to establish the first simplistic rules for arranging flowers was made.

Are you using any of these influences in your floral design for your Wedding?, Tell me your wedding inspiration by dropping me an email at info@lmsweddings.co.uk

Don’t forget to follow me on Social Media for more Wedding Planning tips and advice. Click on the links below.