When Sophie contacted me about her grand Wedding Day, there was a couple of challenges set for me.

Firstly, Sophie works within the Events Industry, so she understands the need for an event to run smoothly (no pressure then!). Secondly, there were the logistics of her Wedding Day. There was a rapid turnaround between the Wedding Ceremony and the Wedding Breakfast. Up for a challenge, I was immediately motivated for everything to run smoothly and according to Sophie’s fine-tuned plans. 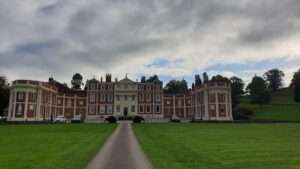 Sophie told me that she and her husband to be, Steve, were getting married at the grand wedding venue, Hawkstone Hall near Shrewsbury in October. I was immediately excited. I’m usually working in marquee’s in the middle of fields, so this grandness made a nice change for me.

Hawkstone Hall is an exclusive use Wedding Venue. So you get the whole Hall yourself to utilise as many rooms as you would like. Sophie and Steve had decided to use only some of the Function spaces. They still certainly created the wow factor in each area.

As the wedding was in October, they used a range of jewel tones and vintage glamour.

I arrived on-site an hour before the guests were due to come to make sure that any final touches had been completed and liaised with the Wedding Suppliers to ensure they were in the correct place for the right time.

The first supplier to arrive was Meredith, the Harpist who was due to perform for the guests when they came into the reception area.

Second to arrive was Wendi, the Celebrant.

The Grand Arrival of the Groom 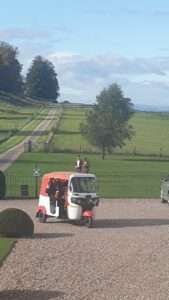 Hawkstone Hall has a fantastic driveway leading up to the Entrance.  Steve was keen to make a grand entrance to all of their Guests – which was to be a big surprise (Even I wasn’t told how he was going to arrive)

With great anticipation, the Guests were all waiting outside the Hall until finally, a small image appeared in the distance… what was it? A golf cart? No. There he was, Steve arriving in a Tuk-tuk, quite James Bond style!

The Ceremony – Before, During, and After

Once Steve had made his grand Entrance, Guests made their way towards the Winter Gardens before making their way into the Chapel, where the ceremony was due to take place. 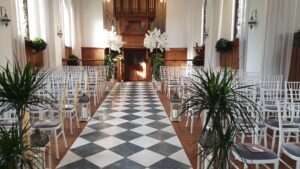 As the Guests made their way to their seats, they were sang to by a fantastic duo called Luna. They also performed several songs during the Ceremony, including Nessun Dorma for Sophie’s well-timed Entrance and The Power of Love, shortly before Sophie and Steve made their vows and exchanged rings.

The Ceremony was beautiful and very personal to Sophie and Steve. You could tell that a lot of time and planning had gone into what they wanted to say to each other. They had also written letters to each other to open in 10 years.

After the Ceremony, Guests moved outside for photographs before going back into the Winter Gardens for drinks and amuse-bouche while being serenaded to the sounds one again of Meredith.

Now, the pressure came – Sophie and Steve also decided to have their Wedding Breakfast in the Chapel.  We had just about one hour to transform the room from a Wedding Ceremony to an area with tables and chairs for guests to eat 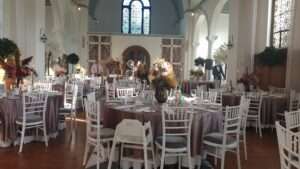 Fortunately, with every Wedding, the fantastic photographer, Abi Boyle, and Videographers from Creative Depiction Studio worked in our favour. They took their time (as they should, of course!) capturing memories of Sophie and Steve’s special day. Therefore, the timings went a little of the window. However, just over 20 minutes later, we were all done and ready to welcome the Guests into the transformed Chapel.

Sophie and Steve decided to have speeches between each of their three courses, including a fantastic rendition of At Last by Etta James sang by Sophie. While guests were tucking into the meal, a tremendous performer, John Prescott, sang what else, other than “Me and Mrs. Jones” for the grand entrance of the newlyweds and at the end of the Wedding Breakfast got the guests into the party spirit.

A little later than planned, the Wedding Party moved into another area of the Hall. This time, The Ballroom, where yet more performers entertained guests, The Brass Monkees, a nine-piece band. They performed the first dance for Sophie and Steve, which was their version of Mumford and Son’s “There will be time”

My role for this Wedding was slightly different from usual. This time, I was there to make sure that the tough turnaround time happened. A lot of the tasks that I usually perform, such as making announcements and keeping track of time, were passed to someone else from Hawkstone Hall. That person was Rik Holmes, who I cannot leave out to mention. He was terrific and very professional. 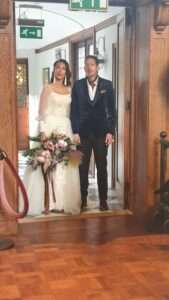 When I first met Sophie over a Zoom Meeting through to the pre-wedding meeting a month before the day, I could tell that a lot of planning had gone into this grand wedding day. I genuinely believe that Sophie and Steve made the day all about them which should be exactly as it should be!